This post is part of a series about the challenges behind database performance and how to accurately assess it.

Purpose of an ingress benchmark

When evaluating a timeseries database management system (later referred as TSDBMS or TSDB), one important dimension is the ingress speed (a.k.a. insertion or ingestion), that is, how fast the database can store new data points.

Some use cases have terabytes of data generated per day and it’s unrealistic to hope to be able to support them without excellent ingress speed. Even for less intensive use case, you want to make sure your TSDB can ingest the data at low latency for improved analytics relevance.

It can be measured in points per second (one point being a timestamp, value couple), rows, or bytes per second.

In this article we’ll show you how we benchmark the ingress speed of QuasarDB and how it fares compared to some known competitors.

Considerations for an ingress test

The most two frequent ways we see our customer insert their data into QuasarDB are:

Our experience for timeseries is, that insertions through SQL queries are limited to corrections and small modifications.

In this post, we’ll explore inserting data from a file as most TSDB have a method for that, giving everyone a fair chance, and it represents a frequent use case.

For this blog post, we’ll use a 110 MiB file consisting of years of minutes bars (Open, High, Low, Close, Volume) from a Dow Jones stock.

This file is made of floating-point values and integer values and has enough variability so that naive compression will insufficient but not random to the point that compression is impossible.

Each database will ingest the same file.

We will in future posts post more results with different files. It is our experience this 110 MiB file gives a good chance to any database to perform well and a good preview of the performance level a database can deliver.

For each evaluated TSDB, we’re using, if there is an available tool to import data from a file. We’re also considering in the documentation, what kind of guarantee this tool has. If no tool is available, we’ll use the recommended performing API to insert a CSV file.

What and how to measure

For ingestion, you typically want to measure insertion speed and the total disk size. However, there is a catch for both

In all rigor you may want to consider the compaction time in the insertion benchmark, however, compaction is amortized across all insertions thus, we decided to measure only when the data is stored in the database (QuasarDB persistence layer uses Helium, which isn’t a LSM).

For each test we’ve done the following, to reduce noise:

The client and the server are linked directly, reducing to almost zero network interference.

Both machines are identical and have the following configuration:

Data on the client (for the source file) and the server were stored on a Samsung SSD 860 EVO 1 TB.

Getting our butt kicked

After running the first round of benchmarks, we could see that we were doing well, except for one outsider 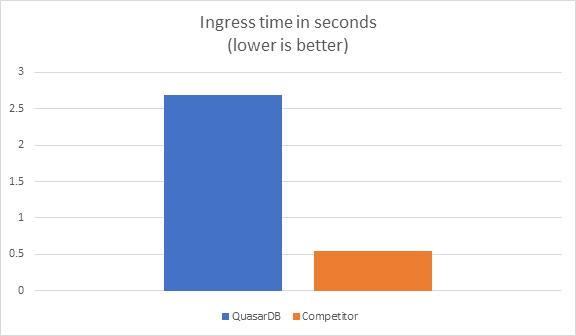 Ah! Well, I guess we can forget about being a high performance timeseries database, time for a pivot? This competitor is five times faster than us!

If you remember our previous blog post about performance, there is a section where we discuss that a significant performance difference needs a very solid explanation.

In this case, the two databases have been running on the same hardware in a controlled environment. A 5X factor is statistically significant and was reproduced every time.

The QuasarDB core is the result of 10 years of intense R&D centered about database performance. It is written in Modern C++ 17, we have high-performance compression algorithms, bypass the kernel to write to disk thanks to Helium, have zero-copy network protocol and have high performance, column-oriented representation of the data.

When using railgun, data is sent in optimal packet and data is barely transformed, if not at all.

Is our hubris blinding us? Is there something we are missing; an obvious optimization or performance gain we’re not aware of?

It then became obvious that, yes, of course, the competitor could insert much faster than us using multithreading. We thus adjusted their importing tool to use a single thread, but they were still significantly ahead.

This is the moment to discuss about the number one trick used by databases to cheat insertion benchmarks: buffered writes.

While writes are rarely completely unbuffered, in our case none of the 100 MiB were written to disk.

Asynchronous persistence has its raison d’être and is not “evil” by any measure, it just comes with a heavy price: when the buffer is full, writes are stalled. Or if the database allows the buffer to grow indefinitely, it will eventually run out of memory (Couchbase is famous for that limitation).

One way to beat buffered writes, if it cannot be disabled, is thus to insert data larger than the buffer. In future benchmarks, we’ll show you how database behave when you insert more than 110 MiB. It’s also interesting as it stresses automatic compaction and trimming processes (if any).

In this very instance, solving this problem was easy as the competitor was no one else but… ourselves! Indeed, for the sake of the demonstration, and because we have no interest in shaming a competitor, we simply set railgun to asynchronous mode.

We hope this example will have taught you how to second guess the benchmarks you’re being shown.

One notable absence: because of the KDB+ license, we cannot include KDB+ in these results. You can however, do the tests yourselves with our free community edition!

The TSDB compared are thus:

Insertion was doing our importer tool called “railgun”. We did the insertion using synchronous commits with one and two threads (for a fair comparison with ClickHouse).

QuasarDB was configured using Helium and the disk was mounted as a raw device, enabling kernel bypass. Import was done with our importer tool, “railgun”.

Even when configuring the inserter to be single threaded, it seems to use two threads according to system monitoring tools. This may be a bug or a design limitation. We included values for QuasarDB with 2 threads for this reason.

For insertion, we wrote a custom Go script using the insertion API. We tried using Telegraph, it was much slower. We also tried converting the CSV and then using the influx import function, and it was slower. We would be keen on knowing if there is a faster and more efficient way to insert into InfluxDB has it delivered the worse results of the benchmarks.

We used “COPY FROM” to insert the CSV file.

Our benchmark shows that QuasarDB outperforms every database in both speed and size. ClickHouse comes as second for speed and disk usage.

It must be noted that QuasarDB offers the best performance while delivering a different level of reliability, as when the device is mounted raw with Helium, the data is only buffered for one page and data is physically persisted to disk, bypassing all system caches.

Neither TimescaleDB nor InfluxDB managed to deliver satisfactory insertion performance (If you believe we used the wrong approach for either database, feel free to reach out).

For disk usage, QuasarDB is number one and we’re currently working on significant compression improvements for 3.3, we thus expect our advance to grow. Should we then rename the database to PiedPiperDB?

In all fairness, all timeseries databases except TimescaleDB did well on the disk usage part. TimescaleDB uses more than ten (10) times the disk the best performer did. This is problematic as timeseries use cases are typically voluminous.

If we show the ranked results with percentages, we have: 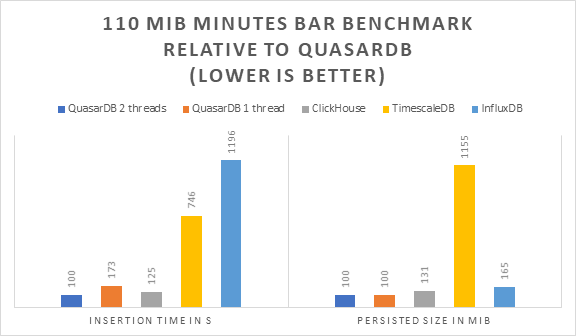 If we aggregate the results, the ranking for ingress performance for this test is:

We hope you enjoyed this performance report, stay tuned as we’re going to stress the database ingress capabilities even more in a future post! We will see that larger workloads increase the performance difference between the various engines.

In the meantime, why don’t you give QuasarDB a try?